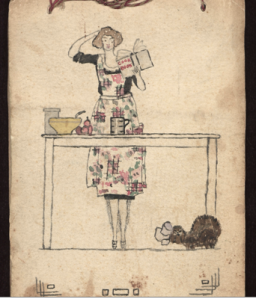 A handdrawn illustration from an Iowa cookbook. But what is that under the table — a platypus?

Even better than one’s own diaries are other people’s diaries.  So when I found out that the University of Iowa needs us all to spend a little time poking through other people’s diaries, I said Sign me up!  That is, I said it to myself, since you don’t actually have to say it to the University of Iowa.  You just go to the website and start poking through a bewildering line-up of fascinating documents.  And here’s the thing — it’s not nosiness, it’s scholarship.  Disguising nosiness as scholarship — my modus operandi!

It works like this: archives with piles of unedited material post the photos online, and civilians like you and me do the transcription.  To give it its official description, the transcription is crowd-sourced.  The page is open before you on the site, and you just type your transcription into a little box undernearth.  You do as little or as much as you want.  Someone will come along later and check your transcription — or you can spend some time checking someone else’s.

The University of Iowa library’s “DIY History” site is bulging at the seams with documents to be transcribed: diaries, letters, and cookbooks.  Or you can go for pictures and tag historical photos.

They have a whole collection of Civil War diaries waiting to be transcribed.  Among the other diaries is a set called the Iowa Byington Reed diaries.  Here the “Iowa” is misleading — the author of the diaries was named Iowa.  This leads me to think of all kinds of lame jokes, but thankfully I’ll move on to a description.  Iowa Byington was a housewife, teacher, and seamstress who married a farmer named Will Reed.  She left eight boxes of diaries — 2.25 linear feet — covering her courtship, wedding preparations, news, family, wars, celebrations, and everything in between, from 1879 to 1936.  She’s not a particularly elegant or effusive writer, but somehow her ordinariness speaks volumes.  As you can imagine, you could easily get resolve only to peek into a page or two and end up getting lost for an afternoon.

The part I’ve been transcribing comes from 1920, when Iowa (the person, not the state) was 69.  She appears to be living with her daughter.  What was there to do in the long winter months?  No television, of course, and apparently no radio.  Visitors drop by, she goes on visits, and she spends much of her time making coverlets and writing letters to her sister Hattie.  She doesn’t seem to note Valentine’s Day.  But her late husband Will is never far from her mind.  She writes:

Thursday February 12 1920. Fourteen months today and same day of the week since we put Dear Will away. I looked over our papers and crocheted.

Friday February 13 1920. A cold day.  Read my papers in forenoon and worked on Venes spread in afternoon and evening.

Saturday February 14 1920. A very cold unpleasant day.  Lora went to Peoria. I crocheted some. Wrote Hattie and sent papers to Aunt Sarah. Vene and Edith busy with the work.

Sunday February 15 1920. Still cold. I read the papers some. Wrote … Lawrence. We had our dinner in the kitchen.  Lora went to church.

Monday February 16 1920. I was home all day.  I kept busy with my crochet work.  It was 19 years ago today since Will and I moved to Coralville, to make the house that he loved so well and now I have neither him or that house.

Browsing around in her earlier life provided some flashier spots, but somehow I found the sameness of her later life quite moving.  Similarly moving was the Civil War diary I transcribed.  In the part I tackled, the man hadn’t yet left home; he was a bachelor doing farm chores, rising at dawn, to bed at nine o’clock.  He didn’t know that soon he would be off to war and that the hard round of farm chores would soon seem paradisical.

The handwritten cookbooks are equally fascinating.  From an American cookbook of 1850-1870: “Pickled oysters.  Take a hundred and fifty-five large oysters…”  A cookbook from the 1920s features Divinity Pie and Butterscotch Pie.

And here for your delectation is a recipe from the euphoniously named Penelope Pemberton, dating from 1716.  I’ve added punctuation, but this is otherwise a faithful transcription.  You can tell how Penelope pronounces her words by her phonetic spelling, e.g. “crame” for “cream.”  “Orring” must be an orange.    A “pudin” is of course a British pudding, i.e. a dessert, not the creamy American kind of pudding.  I wonder if biskits/biscuits refers to American-style baking-powder biscuits or British-style cookie-like objects? “Sack” is wine.  But — what is suckit?  Or have I transcribed it wrong?  Suggestions? (The original is down below, atop the rest of the transcription.)  The suckit doesn’t actually seem to figure in the recipe, so perhaps you have to bring your own suckit to the feast. 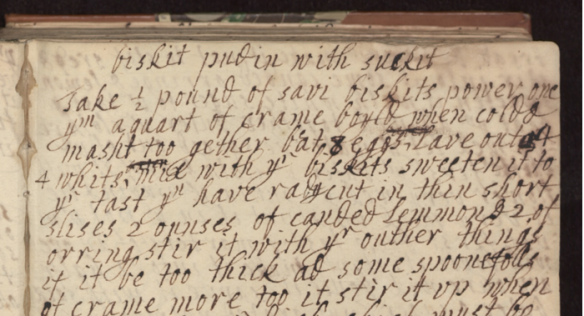 Beat 8 eggs, lave out 4 whits, mix with yr biskits, sweeten it to yr tast. yr have rady cut in thin short slises 2 ounses of canded Lemmon, 2 of orring. Stir it with yr outher things. If it be too thick, ad some spoonefolls of crame more too stir it up, when yll put it in yr dish which must be butterd and past laydd a bout. Be quick with it into oven when it is stord up, 1/2 an ouer or 3 quarter will bake it.  Sarve it with sack, butter & suger.  If yll plase yll may make 1/2 pudin and put in 3 ounses of all Lemon or 3 ounses of all orringe or 3 ounses of sittron.

Those spare minutes and hours spent noodling around on the internet can now gratify your nosiness be both entertaining and helpful!  As you eat yr Biskit Pudin, wander over to the University of Iowa “DIY History” project and have yrself a look.

10 thoughts on “Crowd-Sourcing Private Life, plus free recipe for Biskit Pudin (with Suckit!)”